How Much Glide Wax Do We Waste?

Recently I visited a ski shop that  waxes everything for snow sports.  Alpine skis,  XC skis, snowboards, jumping skis, and lots of them. I got a tour of their state of the art shop and saw their infra-red waxing tool.  It was all very cool, but what really caught my ear was the fact that the infra-red waxer cut their shop wax cost by 75%!  That’s huge and it made me think about the pile of shavings I throw away when I wax my skis.

For years I’ve followed the age old ritual of dripping glide wax on my skis, artfully melting and smoothing it out, hoping not to scorch the bases, and then scraping off the excess that didn’t sneak into some mysterious microscopic pores.

A few years back I stumbled on a technique that I call Hot Crayoning glide wax.  In hot crayoning, you rub the wax on, rather than drip it on, but only after you’ve softened it on your upside down iron.  I much prefer this method for a few reasons. It’s faster since you don’t have to flatten the wax ridges that dripping gives you, it’s easier since the iron glides over the smooth coat of wax on the first pass, and you scrape off far less wax. It’s the last point, scraping off less wax, that inspired me to do a little test to see just how much wax I was throwing away. 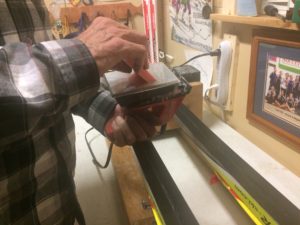 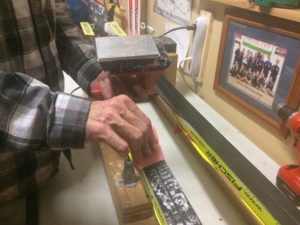 This is only mildly scientific and there is all sorts of room for error, but the big picture results are pretty compelling.

I set off to the wax cave with three nearly identical pairs of skis, my cherished Rossignol X-Iums, a brand new hunk of soft glide wax, a newly sharpened scraper, and a digital scale that I purchased just for this test.

The plan was to first “zero” the skis by waxing them all with the same base wax so one of my more neglected pair didn’t suck up more test wax. Then I would wax one ski of each pair with the dripped on technique, the other hot the hot crayon.  I weighed the chunk of glide wax before  and after I applied it so I knew how much went on the ski. Then after scraping I did the best I could to gather up all wax, that typically would go straight into the garbage can,  and weighed it. The difference, minus a little lost dust, was what absorbed into the ski. 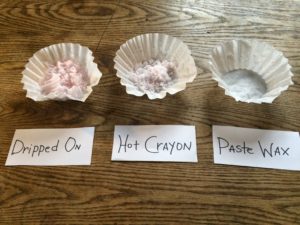 SCRAPINGS HEADED FOR THE GARBAGE

I averaged the data from all three similarly waxed skis and came up with details that told me what I already knew, we throw one heck of a lot of expensive wax in the garbage.

Here’s how it shook out.

So how much wax do we toss out? The results were scary for me. I know by the time I’m done waxing a few pair of skis I have quite a pile on the floor but I didn’t realize that with the drip wax I tossed 72.6% of the wax I applied,  but with the crayoning it went down to 52%.  52% is a big number but its 57.8% less waste than dripping and the same amount of wax stays in the ski!

Given these numbers,  I won’t be dripping wax anymore, but then I wondered about paste wax.  I love Fast Wax’s Slick Pro wax, and use it a lot between hot wax jobs. The stuff is easy to apply and gives me slippery skis. A few times I’ve gotten to the trail in the morning for a busy day of lessons and realized I forgot to glide wax. A quick coat of Slick Pro and I have slippery skis all day!  So, how do the paste wax numbers come out?

To calculate how much I was applying I weighed the applicator pad when I had it loaded with wax, and then after I’d rubbed it on the ski. Calculating how much I scraped off was easy. Zero.  I’m sure I lost some to the thermo-block and some dust, but nothing I could retrieve and weigh. How much stayed in or on the ski was a different matter.  Just .12g stayed on the ski.  The hot wax jobs melted 1.14g in on average. Those numbers likely indicate that the paste wax is ON the ski rather than IN the ski, but if it’s heated into the base wax might it bond up?  Fast Wax says it’ll last 15-20k and if heated in, even longer.

So here’s the punch line. We throw 50% to 75% of the wax we buy in the garbage can.  At $30 for some Low Flouro, that’s $15 to $22 of each purchase. The Slick Pro with nearly zero waste sounds like the hot ticket, but possibly not as durable.

My new plan is to hot crayon wax in once a while and use Fast Wax frequently to keep ‘em slippery.  That way I’ll have a few extra bucks for the micro brews I prefer over white beer!

Transform your learning curve. Have FUN and Stay SAFE. Get tips and how-to's for your next adventure.